Often, names reflect a place's history, or prominent persons, conquerors, or events.  The Hebrides if seen from the Norse angle (Viking era 850 ff), is the Southern Islands, or Suoregar, see Etymology Online, as opposed to the Northern Islands, the Orkney Islands off Scotland's northern tip. All the R's mixed with the more traditional name from Roman times, Ebudae or Haebudes.

Hebrides is seen by some as an apparent scribe's misspelling from the more ancient "Ebudae" or "Haebudes" -- adding the r. But a look at the Roman source suggests that the R comes from the Viking name, incorporated. Suoregar and Haebudes or Ebudae.

Commercial sites can offer cultural information that the cultural sites miss.  Find the translations of Enya songs from the album at ://www.pathname.com/enya/shepherd_moons.html/  The name Ebudae, according to that site, comes from the Latin, from old Roman maps .Enya, Shepherd Moons, Ebudae as Roman Name

Enya has a lovely, haunting song called "Ebudae" from the album Shepherd Moons (no, we get nothing for this approval of a nice song)  at Enya, Ebudae, Youtube.  Hear the lower tone drone.


Old Hebrides Culture:  The Shepherd Moons site also identifies the song as a waulking song -- traditional to the western Hebrides, a song sung by women fulling cloth.  Fulling is a beating of woven wool cloth in water so it shrinks and becomes felt. 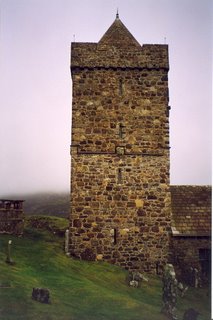 
St. Clement's Church dates from 1528, at Rodel. Harris.   It was dedicated to Alexander MacLeod, who was known in Gaelic as Alasdair Crotach of Dunvegan.  MacLeod died twenty years later.

Ferry time:  just about two hours. We had called ahead for B&B from Skye because it would be dark when we arrived. There is a long, narrow road from Tarbert to Rodel, with a moonscape-rock-boulder twisting way through steep-sided places to Rodel. People drive methodically there, and headlights give you warning. Still, it is a dicey drive.Our B&B was an easy find once there.  See www.visithebrides.com/islands/harris/

Look closely at the tower of St. Clement's tower.  There is what some would call a sheelanagig. Thre is a website that catalogues these at www.sheelanagig.org/, and you can see the telephoto lens close-up: there. It is a woman giving birth. Our photo is less clear. 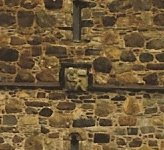 These sheela-na-gigs are usually Irish or English forms, some celtic and pre-celtic, others seen as fertility-type forms at crossroads or on buildings, or at churches. This one is from much later. As holdovers from earlier religions and traditions, they were not totally dismissed with institutional Christianity.

St. Clement's Church is 15th-16th Century, but the sheela-na-gig on the tower really looks far older, perhaps a component of another structure incorporated in the newer tower. It does not appear to me to be the Christian virgin and child as some sites say, see //www.scotland-inverness.co.uk/rodel.htm. She is not sitting with knees together there. See www.sheelanagig.org/. This looks more fertility oriented.  Novelists: who will be the first to write of a secret traditions of the Hebrides as a safe havens for fleeing figures from the holy land?

There is a long tradition of sheelanagigs - many are almost grotesque, others simply showing a fact of life and in a dignified and not exaggerated way.

We all see what we want to see, and it certainly keeps tourists' attention away if you just tell people it is another virgin and child. See post on sheela-na-gigs, the outside of St. Clement's here. 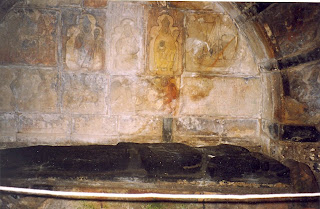 Resting place, Knights, other headstones, frescoes still visible. This was the home of the MacLeod clan. 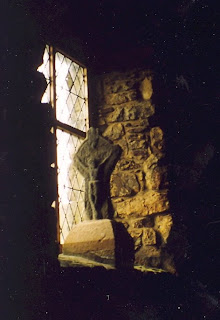 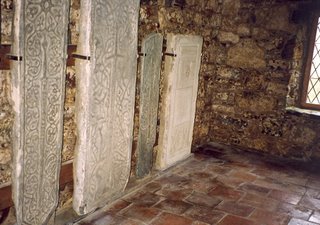 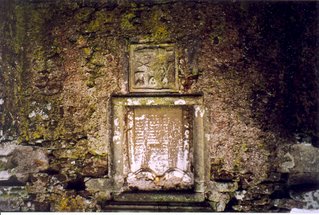 The Church was built in the 1500's. Old headstones and knights. Splendid old tombs - people seem short. This is the resting-place for MacLeods. St. Clement's, Rodel.

We took the Golden Road back toward Tarbert. See an interactive map of the Isle of Harris and Lewis at ://www.undiscoveredscotland.co.uk/usmapindexes/westernisles.html/ Click on the sights on the map to get the best overview.
Posted by Carol Widing at 11/20/2006 No comments:

The Isle of Lewis borders with Harris. Fine fishing town, great seafood. The main town is Stornoway - see www.undiscoveredscotland.co.uk/lewis/stornoway/index.html.
Fine walk out the long pier.
Posted by Carol Widing at 7/13/2006 No comments:

Standing Stones of Callanish, Lewis, The Hebrides.
Above Loch Roag.

Standing stones:  the cluster here at the top is Callenish.

Compare them to the isolated forms at the Ring of Brodgar, in the Orkneys, where we found no such large, complex forms as at Callenish.  See http://www.mysteriousbritain.co.uk/scotland/western-isles/featured-sites/callanais-callanish-stone-circle.html 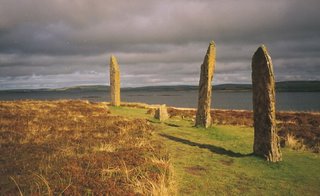 Either way, we preferred the wild setting of the outlying stones, rather than the manicure of Stonehenge. There also is a comfy visitors' center here.

Viewpoint: These things are more impressive when it takes some pilgrimage to get to, and not just be available for an easy drive up on the motorway. Walk out there, feel the wind and the salt. Think. Fold your arms and look out a long way back.
Posted by Carol Widing at 6/23/2006 No comments:

Our photo has disappeared. Until we locate it, see www.castles.org/Chatelaine/AMHUINN.HTM" for Amhuinnsuidh Castle. This is out a long way down a road that has no connection to another road back, so be prepared to backtrack.

We thought from the map that it is open to tourists, as any other castle. When we got there, however, it was rented to some artists who were very friendly and let us use the restroom, take a quick look and leave. Would not miss the road out there. How else see the island?
Posted by Carol Widing at 6/23/2006 No comments:

Link storage area - for later use

Technorati Profile
Posted by Carol Widing at 12/15/2005 No comments:

Standing Stones at Callenish, or Calanais. Isle of Lewis, Hebrides.